The new way to communicate from Google

Advertisement
Hangouts is an official Google application with the objective to facilitate direct and immediate communication between two users. The application replaces the venerable 'Google Talk', adding some new features to the classic messaging tool.

Thanks to these new features, Hangout makes it possible to better express yourself with all kinds of visual material, like photographs and emoticons (emoji), of which you'll have hundreds to choose from.

As you would expect from an instant messaging client, Hangout allows you to see which of your friends are logged in, when they're typing, and when your previous messages have been read. You don't even have to be logged in to receive a message from another user.

Just like in Google Talk, you can change your text-based conversation for a videoconference at any moment. You can connect with up to ten people at a time, just press a button and voilà: instant video chat.

One of the most interesting features included in Hangouts is that you can use the service from any device, picking up a conversation right where you left off. In other words, you can start talking to someone while using your computer, continue the conversation on your iPad, and finish it from your Android smartphone.

Hangouts also allows you to save records of your conversations with each user. This really comes in handy if you want to save photographs that someone has shared with you, since they will already be in personalized folders.

Hangouts is, because of its creator and features, the new standard communication tool for Android devices. And there's no doubt that it's powerful enough to keep that throne for a long time.
Reviewed by Andrés López
Advertisement 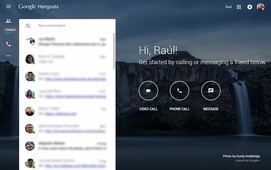 Instagram Lite
A simpler, less involved version of Instagram
imo messenger
Instant messaging with all of your friends
Firefox
The ever-powerful Firefox is now also available on Android
Talking Bear Plush
Have that long-awaited conversation your teddy bear
Kate Mobile
A platform for staying in touch with your friends
Facebook Lite
A smaller version of the full Facebook app
BiP Meet
Hily
Meet hundreds of people from around the world